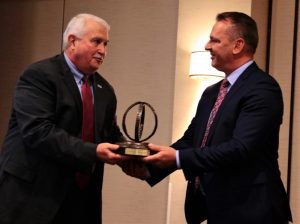 On Wednesday, October 16, CAST celebrated the 10th anniversary of its annual Borlaug CAST Communication Award by honoring this year’s prize winner, Frank Mitloehner of the University of California-Davis. Dr. Mitloehner, an expert on air emissions and animal agriculture, uses presentations, media appearances, research, and teaching to promote clear, factual information about food production. He has also become a social media influencer, enlightening the public and policymakers alike about the realities of modern-day agriculture. 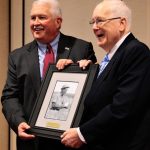 Mitloehner then used a 30-minute presentation to show how facts, logic, and clear messages can help explain information in ways that the public understands. Participants saw “communication in action,” as he pointed out how misleading media reports cause confusion. For example, he showed that beef production is not a leading contributor to greenhouse gas emissions, that ruminant livestock production is valuable, and that fossil fuels contribute much more to climate change than agriculture. Mitloehner also emphasized that we “need to do more with less.” This refers to efficient methods, including thoughtful uses of technology to boost food production. He also thinks we need to do more with what we already have. “The world is losing 40% of food to waste and loss. Scientists, journalists, and policymakers need to know these facts.” 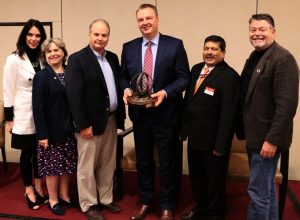 During a subsequent panel discussion, Mitloehner was joined by four previous BCCA winners. Julie Borlaug of INARI Agriculture moderated the spirited discussion about communication. Catherine Bertini (2011 BCCA winner and 2003 World Food Laureate) spoke about “best practices to earn the public’s trust.” Carl Winter (2012 BCCA recipient) pointed out that we need to “educate scientists” so they can communicate efficiently. Channapatna Prakash (2015 BCCA winner) said communicators need to be succinct and use lively language—and he used the misinformation about genetically modified crops as an example. Marty Matlock (2018 BCCA recipient) emphasized problems that come through the media, such as false equivalency and amplified conflict.

Julie Borlaug hosted questions for the panelists, and after many insightful responses from the group, Dr. Mitloehner finished the panel discussion with a positive observation. “Young people are interested in where their food comes from.” He explained that we need to tap into that enthusiasm.
Participants could leave the event hopeful that today’s colleagues and tomorrow’s agriculturalists will keep striving for clear, factual information about the diverse and passionate efforts to continue Norman Borlaug’s legacy to feed the world.