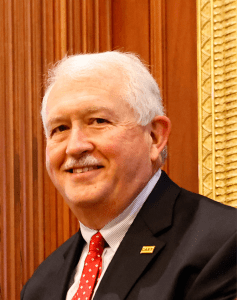 Kent Schescke, Executive Vice President and CEO of the Council for Agricultural Science and Technology (CAST), has announced his plans to retire in 2023 after almost 50 years of service to the agriculture, education, and scientific communities.

Schescke has been instrumental in increasing the awareness of CAST’s mission and activities; growing its membership and publication production; and guiding the nonprofit through a challenging pandemic. He has also focused on enhancing the engagement of its membership, which includes scientific/professional societies, universities, nonprofit organizations, companies, and individuals.

“I have enjoyed my time with CAST, particularly the opportunity to work with a talented, hardworking staff and a committed leadership,” says Schescke. “All these dedicated individuals have supported me in telling CAST’s story about communicating the science, technology, and innovation so important to the future of food, agriculture, and the environment. It has been a privilege to work within the agricultural community throughout my career.”

Now he looks forward to supporting the CAST Board of Directors in their efforts to select the next chief executive officer.

A recruitment committee has been formed to ensure CAST’s continued success and smooth transition to the next EVP/CEO. The committee will soon begin the search and selection process, and plans to have it completed by spring of 2023.

“The growth of CAST under Kent’s leadership has been tremendous,” says CAST President Anna Dilger. “We are grateful for his enthusiastic leadership as we carry out our mission providing credible, unbiased, science-based information about food and agriculture to guide sound policy decisions. As we look towards the future for CAST, we seek a dynamic leader who will provide visionary leadership to the organization to expand our impact.”

A position description and application information are posted on the CAST website and can be accessed here.

CAST is an international consortium of scientific and professional societies, universities, companies, nonprofits, libraries, and individuals. CAST convenes and coordinates networks of experts to assemble, interpret, and communicate credible, unbiased, science-based information to policymakers, the media, the private sector, and the public.