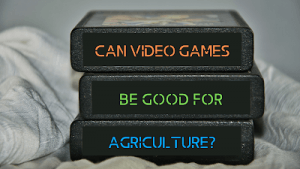 Recently, my boyfriend dusted off his Playstation 1 and popped in the oldie-but-goodie farm simulation game Harvest Moon (originally released on the Super Nintendo Entertainment System in the late 1990s).

I watched him laboriously build his farm, plant crops, and take care of livestock. One animal that gave him particular trouble was Rusty, a clever, mischievous horse that somehow managed to escape the barn whenever it rained. My boyfriend spent 20 minutes chasing that horse into the barn so the darn thing wouldn’t get sick. Ironically, it was my boyfriend’s character (not the horse) that ended up in the hospital because he overworked himself.

Testing Risk in a “Safe” Space
While the game is quite simple, some of its objectives and outcomes seem pretty realistic. And those components of the game have only advanced since the 90s–so much so that real-life farmers are playing the latest farm simulation games to test out authentic equipment, operations, and scenarios based on their real-world equivalents.

For example, Farming Simulator boasts their 2019 update includes “300 authentic vehicles and machines now including John Deere – but also Case IH, New Holland, Challenger, Fendt, Massey Ferguson, Valtra, Krone, Deutz-Fahr, and many more.” (By the way, the game’s fan base has grown so much, there’s a convention dedicated to it, and the game can now be played competitively.)

This game allows players to dive into agriculture and use different equipment and strategies that they may not have access to in the real world. Essentially, they can take on as much risk as they want and suffer only virtual, game-based consequences, not real ones (except in my boyfriend’s case, where he suffered from short-term annoyance).

Testing risk and risk management of farmers seems to be a theme in 2019. For example, a University of Vermont study used video games to better understand risk management practices of farmers through different scenarios. Based on the scenarios introduced, players changed their behaviors in the game to reduce risks. The study found that the smallest behavior changes dramatically impacted the outcome of preventing a risk, which can be used to create more effective strategies in real-world situations.

Another study released this year argues that “serious gaming” (i.e., games that aren’t played for entertainment purposes) should be considered as a communication strategy in agriculture to open up “new ways of thinking” about critical issues, such as climate change, and help provide new adaptive strategies.

Research of the Future?
Testing human behavior and attitude change via video games is becoming more popular because of the digital era we live in. And it’s a safe, controllable place to test strategies aimed at preventing serious risks such as the spread of livestock diseases (see the UVM study above).

It will be interesting to see how this intersection of agricultural and psychological research progresses in the coming years as scientists work out new ways to prevent risk and mitigate issues such as climate change and African swine flu outbreaks.